The impressive 4 star, city-centre Crown Plaza hotel on Wellington Street in Leeds has joined the energy revolution with the installation of two 50kW G-GEN™ combined heat and power engines.

The chp units are installed in the plant room which is situated on the same level as the basement car park. As such the plant room has a 2-metre height restriction which provided an engineering challenge that the GET-IM installation and maintenance team were more than able to accommodate. 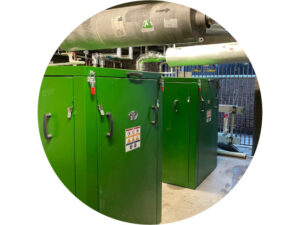 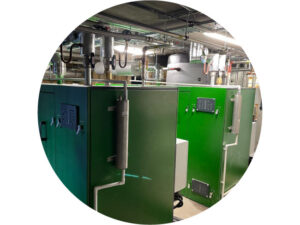 Since the two engines have fired up, this busy hotel has been benefiting from significantly lowered carbon emissions and a drastic reduction in operational overheads.

The chart below demonstrates the hotel’s the first of the two engines being tested on the 18th January, with the first engine going live on the 19th. The second engine followed and was fired up on the 21st January. The two engines are now running optimally delivering an impressive 100kWhs of power and 240kWhs of heat every hour.

The G-GEN™ CHP engines generate electricity which will replace the hotels’ baseload that would otherwise have come from the mains grid. Additionally, the heat produced by the CHP engine (a by-product of the generation process) will feed directly into the Hotel’s LTHW system.